After the crisis in 2008, land prices all over the world are dropping, making this an excellent period for great land investment opportunities.

As many relevant studies show, since the beginning of 2008 there has been a rapid increase of interest from international investment companies, who want to exploit the “tidal wave” of tourist development that currently takes place in Greece.

Most of these companies are from the UK, Scandinavian countries, the United Arab Emirates, Russia, Israel and China.

There is also a national plan of high priority to increase the Greek tourism by no less than 50% in the next five years. This, in simple Greek, means that there will be huge, one-of-a-time opportunities for land investors in Greece, during these five years.

According to numerous studies that monitor the trends of the Greek Real Estate Market, in many areas of tourism interest, the predicted increase in land prices, during that five-year period, is estimated to be between 100% and 150%.

CEO of a big investment fund has recently said:

In Greece, apart from the considerable reduction in land prices – which used to increase literally every month during the past five years – there are other specific factors, that make the Greek Land Investment Market hard – and costly – to ignore.

One of the main factors is that the lack of a reliable national land registry, which has possibly been the biggest problem in the past, is coming to a final solution.

A modern, centralized and online accessible land registry is set to be completed by 2010 – which, according to most relevant studies, is the year that land prices will begin climbing again.

Cyprus tourism is experiencing nothing short of a revolution.

Ambitious luxury marina and hotel developments are springing up in all coastal towns, plans to build the island’s first and only integrated casino resort – by global heavyweights Melco and Hard Rock – are in the pipeline, and foreign direct investment into the sector is at an all-time high.

Tourism has proved to be the most resilient of Cyprus’ commercial sectors, generating 12% of the country’s GDP in 2016 – a year which defied expectations and was record-breaking in visitor numbers, which reached 3.18 million.

The sector is undergoing the most comprehensive restructuring since 1960, and new markets are being opened.

Also, the longstanding problem of seasonality is being energetically tackled through the introduction of various niche areas, such as rural, health and wellbeing, nautical, religious, conference, sports and wedding tourism.

A Vision for the Future

Cyprus has embarked on an ambitious new strategy with the aim to further boost both visitor arrivals and tourism revenue and create 47,000 better-paying jobs by 2030.

In the same time frame, the country has set its sights on attracting €20 billion in new investment and doubling the share of tourism in Cyprus’ economy.

To reach these demanding targets, Cyprus would need to attract at least 4.8 million foreign tourists, of which 40% would be during the traditionally dormant winter months between November and April to ensure the sector’s future competitiveness.

Developing the island into an established year-round destination is an arduous task, but considering the growth the sector has already witnessed in the last two years – despite a recent financial crisis – there is strong reason to believe it can achieve its goals.

Cyprus’ new strategy envisages redefining the island as a premium holiday destination, capable of attracting tourists with greater spending powers, who have an average per capita expenditure of between €250-500 a day, as opposed to the tourist of today, who spends on average €78 a day.

To attract the high-spending visitor, it is crucial for Cyprus to undergo a comprehensive upgrading and refinement of the existing tourism product – a move that would aid in attracting the €20 billion in private investment over the next 14 years.

It is expected that this type of investment would be matched by a corresponding increase of around 15% in state funding of the industry, which would be used to provide a richer holiday experience, and one that emphasizes culture, indigenous heritage and natural environmental features – all underpinned by a high-quality hospitality industry.

While Cyprus is certainly not turning its back on the traditional ‘sun and sea’ model, it is moving to reposition itself in the holiday market to provide a more enriched, diversified and ultimately more sustainable product. 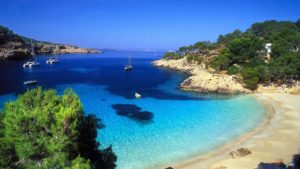 The island may be moving towards a more sophisticated offering, but a key aspect of its winning package remains its ideal weather of 340 days of sunshine and its pristine beaches – one of its core natural attractions.

Cyprus’ coastline has been recognized internationally, with its beaches ranked as some of the best in Europe.

The EU’s annual bathing water report recently listed Cyprus as having the greatest number of ‘excellent’ beaches for swimming amongst all the 28-member states.

According to the report, around 99.1% of bathing water sites in Cyprus in 2015 had ‘excellent water quality’. The report was published as another famous Cyprus beach, Fig Tree Bay in Protaras, was awarded a coveted Blue Flag – an award which brings the number of Blue Flag beaches on the island up to 59.

All Greek Properties is one of the leaders in the market that have launched a project to combine real estate with tourism market.

All Greek properties has the expertise in property investments in Greece as well as an outstanding team of experts in tourism market.

The last fifteen years, All Greek Properties team among other marketing activities has managed to participate in the biggest tourism exhibition in the world such as

As a result, All Greek Properties has achieved to place a collaboration with worldwide tour operators and travel agents as well as the biggest VIP, concierge companies around the universe.